Failure is a Good Thing

You must embrace failure if you want to change the world.

Robert Greene wrote the following that forever changed my life..

There are two kinds of failure. The first comes from never trying out your ideas because you are afraid, or because you are waiting for the perfect time. This kind of failure you can never learn from, and such timidity will destroy you. The second kind comes from a bold and venturesome spirit. If you fail in this way, the hit that you take to your reputation is greatly outweighed by what you learn. Repeated failure will toughen your spirit and show you with absolute clarity how things must be done. In fact, it is a CURSE to have everything go right on your first attempt.

By failing you have everything to gain.

Sadly in our world today we punish or ignore failure. Self worth is based on success. Take the stigma off failure and embrace it. For when you get out into the real world you quickly learn the most successful people are the ones who failed often. They simply used failure and hardship to their advantage.

I know it’s not easy. That’s why success is hard to achieve. Learning to fail is the secret sauce to Mastery. It’s human nature to avoid pain and seek pleasure. Taking the path of least resistance is built into our DNA. It’s hard enough to overcome the fear of failure without also adding how the rest of the world views it too. Schools base your value on test scores. What happens if you don’t test well? Does that mean you don’t know the material? They say ‘try harder!’ Well I contend it’s ‘try smarter!’ Taking the output of your effort and changing something so it’s different next time. Failure simply indicates need for a change.

I’m trying to learn some country line dancing routines. YEs, you read that correctly. Seriously I am. Why? I love to dance. I really do currently suck at the line dancing now and I fail a lot. But with each step I suck a little bit less and become a bit better. I look foolish yes, but I am also having fun and learning to move in a different way. It takes time to program new movement patterns. If we all gave up when it was tough to move, we would never walk. It’s a real pain in the ass to learn how to roll, sit, crawl, and stand. However we kept going. People were always there to encourage us to improve, especially our parents. When you get older and the real world hits you in the face, that encouragement is often GONE! Replaced instead by judgement, criticism and negativity. Be tougher on yourself than anyone else would ever be and use that to your advantage.

The world is not fair and I got news for ya, it probably never will be. So instead of wishing for a world of fairness, take control of it yourself and embrace creating your own path. There are no Unicorns on the path to success.

As Bill Bradley once said,

Ambition is the path to success. Persistence is the vehicle you arrive in.

So fail…and learn…and become a BADASS! 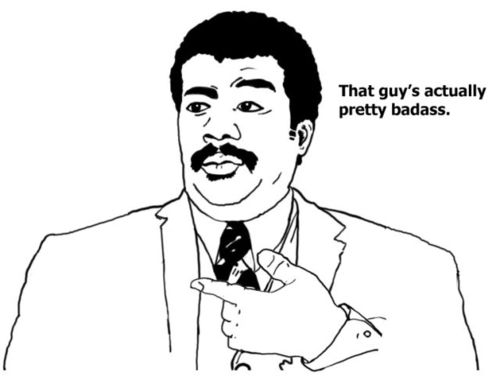