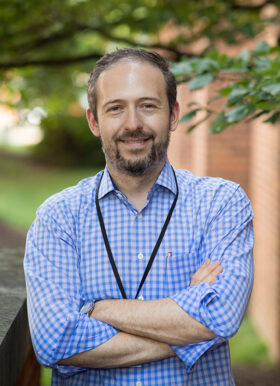 In this episode, we chat with Jonathan Kipnis, Ph.D. – BJC Investigator. Jonathan Kipnis is a neuroscientist, immunologist, and professor of pathology and immunology at the Washington University School of Medicine. His lab studies interactions between the immune system and nervous system. He is best known for his lab’s discovery of meningeal lymphatic vessels in humans and mice, which has impacted research on neurodegenerative diseases such as Alzheimer’s disease and multiple sclerosis, neuropsychiatric disorders, such as anxiety, and neurodevelopmental disorders such as autism and Rett syndrome.

While it was initially believed that both the brain and meninges were devoid of lymphatic vasculature, the landmark Nature paper by Jonathan Kipnis and his postdoctoral fellow Antoine Louveau was published in 2015. By 2016, this paper was cited nearly 200 times.

His discovery of meningeal lymphatic vessels was included in Scientific American’s “Top 10 Science Stories of 2015”, Science Magazine’s “Breakthrough of the Year”, Huffington Post’s “Eight Fascinating Things We Learned About the Mind in 2015” and the National Institutes of Health’s director Francis Collins year-end review.

Other research has included the 2015 discovery that the immune system directly affects social behavior and that IFN-gamma is necessary for social development. This expands upon his work as a graduate student when he discovered that mice lacking T-cells had cognitive impairments.  (Biography reference – Wikipedia)

This episode is brought to you by Therasage. Use code: STOPCHASINGPAIN at checkout.