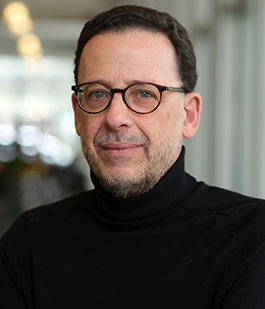 In this episode, we chat with Dr. Guillermo Oliver.

Guillermo Oliver is a Uruguayan-American research scientist. He is currently the Thomas D. Spies Professor of Lymphatic Metabolism at Northwestern University, and director of the Center for Vascular and Developmental Biology at the Feinberg Cardiovascular Research Institute. Oliver is an elected member of both the American Association for the Advancement of Science and the Academia de Ciencias de América Latina.

One of Oliver’s research focuses has been the lymphatic vasculature, and his laboratory demonstrated that Prox1 activity was required for the differentiation of lymphatic endothelial cells and the formation of the entire lymphatic vasculature.[9][10] They later showed the role of lymphatic vasculature on obesity.[11][12] His laboratory also identified Six2 as a critical gene in the process of generation of nephron progenitors[13] and demonstrated that Six3 activity was required for the formation of the mammalian forebrain and neuroretina in mice.[14][15] He expanded those results using embryonic stem cells and induced pluripotent stem cells to generate eye organoids that mimic early eye development.[8] In 2020, he published his research on the role of the Reelin protein promotes cardiac regeneration and repair by reducing cell death after heart injury in the journal Nature.[16][1

To learn more about Guillermo Oliver, visit @NU_Lymphatics on Twitter or on the Northwestern Medicine website and bio.

Reference: The Lymphatic Vasculature in the 21st Century: Novel Functional Roles in Homeostasis and Disease.