Taping the Diaphragm (Are You Crazy?)…Ummm Yep

The answer to that question is….YES! I am crazy. Like Steve Jobs says, ‘The ones who are crazy enough to think they can change the world are the ones who do.’ So I’m gonna keep trying. I love crazy. Who the hell wants to be normal anyway? Boring. So let’s be crazy together.

I’m gonna keep this short, sweet and simple. A brief glimpse at a kinesiology taping technique I personally use. I don’t teach it in the Rocktape Fascial Movement Taping (FMT) course. As far as I know I have not seen it done anywhere else. So I figured WTF let me give it a shot. So I did.

I began experimenting with the tape and found this diaphragm application to be very powerful for me. The following application is completely anecdotal at this point. I have seen wonderful results on myself and clients. The change in breathing pattern and down-regulation into the para sympathetic state has been promising. Diaphragmatic breathing is the secret passcode into the parasympathetic state. We want that in the pain game. Pain locks you in an up-regulated sympathetic state and you have a difficult time letting your body relax. If you feel like experimenting too try this technique and see for yourself.

We are going to take advantage of stimulating Chapman Reflex Points with the taping application. What are Chapman Neuro-Lymphatic Reflex Points? Neuro-lymphatic reflexes were discovered by Dr. Frank Chapman, an osteopath in the 1930’s. Through palpation Chapman found tender areas on the body, which he believed to be an increase and even congestion in lymph. Releasing these points via stimulation leads to positive effects on an individuals health. Dramatic changes in pain are often felt after stimulation of these points. Neuro-lypmhatic points for the diaphragm are along the entire sternum from collar bone (Sternoclavicular joint) to xiphoid process (top of your abs). Manual stimulation of these points and then taping them can impact positively influence breathing patterns.

Here is the process:

Aggressively massage and rub the sternum (see where tape is applied in the picture below) for 2 minutes paying close attention to tender spots. Start at the SC joint (Sternoclavicular joint) and work your way down over the entire sternum.

Warning: Some spots may be excruciating to massage. Do it anyway, but more slowly. The pain will slowly decrease.

Then apply kinesiology tape on the center of the sternum starting form the SC joint down. No stretch on the tape. Throw out your chest to expand your ribcage. Stretching the basic and tissue before applying the tape. Don’t hunt over and apply the tape. Shave any hair on the chest for men if possible and obviously for women move the breasts aside. The tape will give 24/7 proprioceptive stimulation to the Chapman points. Never ending show and awe activation.

Notice the difference in breathing. You may feel an immediate sense of relaxation. Posture and head position feels different. During athletic performance you may notice a change in your durability and endurance. Wear for 3-4 days or as long as you like. Use it the next time you are doing corrective exercise movements.

As Karel Lewit says, ‘If you don’t own breathing you don’t own movement.’ Use it as a tool to help become more aware of breathing. Mindful awareness is critical to changing poor movement habits.

**Have fun and please don’t hate me when you have to take the tape off. 🙂

Hint: Use beeswax or mineral oil/coconut oil to help remove the tape. 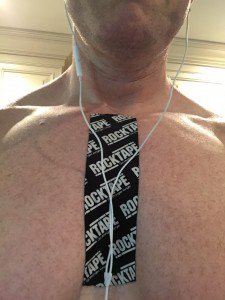