Top 10 Muscle Imbalances and What To Do About Them #2

The rectus femoris is often weak and inhibited playing an inefficient role of flexing the hip and extending the knee. Why? Sitting all damn day doesn’t help. It gets short at the hip and long at the knee. It’s a two jointed muscle with a long lever. The longer the lever the easier it is for chaos to happen.

As a result the popliteus drives more knee flexion, preventing the lower leg from taking full advantage of the elastic recoil of fascia from the foot to the glute. Torque on the knee from the medial tibial rotation causes pain and discomfort when walking, running, or taking stairs. You might feel a lock in the knee that feels like it needs to pop.

Just because the quads look great doesn’t mean they function great. Eye candy doesn’t matter in the movement efficiency area. That’s like having a Ferrari in the driveway that won’t start. Or if it does and you pop the hood you got a Prius engine inside! What’s under the hood matters most. If you have had an ACL injury no matter how long ago you can pretty much bet this relationship exists.

What to do about it? 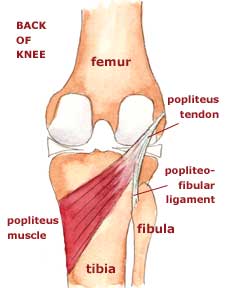 Sit and feel for the popliteus just medial and behind the fibular head. It will run diagonal across the knee down towards the tibia. You will know when you hit it because it usually really hurts. Be careful in the posterior knee because there are lots of delicate structure swimming around in there. Stay more lateral towards the fibula and you should be ok. To ensure you are on the popliteus resist knee flexion while internally rotating your tibia and it should pop out. (VIDEO BELOW)

What you should notice:

Get up and go…

Next one up…#3 Pectorals Minor Dominating Middle Trapezius