Top 10 Muscle Imbalances And What To Do About Them #3

Ahh, the ever popular rounded shoulders and lack of extension and rotation in the thoracic spine, freaky forward head carriage, arm internal rotation and protracted scapula. The monkey look. That’s a lot of chaos going on in there. Pretty much the standard posture of today.

Why is this so common? Think sitting at a desk all day long and mobile phones sucking the life out of you. Nobody looks up, extends, or rotates their body anymore. Transverse plane? What’ that? That’s where power lives my friend and most people don’t own it. They live perpetually rounded forward in a vulnerability posture closed off from the world. 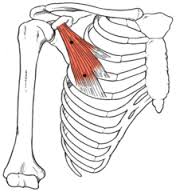 The Pec Minor (PM) is often overworked and facilitated dominating over the weaker middle and lower trapezius muscles. The pec minor causes a shock and awe disaster to the scapula (shoulder blade). The scapula is supposed to be mobile AND stable. How much of each depends on the environment you put the body in. It changes based on need.

Dominant pec minor pulls the shoulder blade down and in, making it hard to raise the arm up overhead. 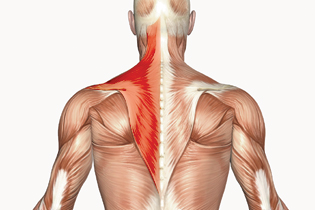 The pec minor dominates over the middle and lower trapezius leading to poor mobility in the shoulder and instability of the scapulothoracic region.

What to do about it?

Massage out the Pectoralis minor by hand or with a soft tissue ball (tennis ball, Rockball, lacrosse ball, etc) and remember to do each side for 2 minutes.

It’s important to do both sides due to fascial connections from left to right. Just because one side hurts doesn’t mean the other side is not involved.

It’s called the CORE 4 MATRIX. The system of effective movements we teach in our courses. (Check them out on our website)

If you enjoy these let us know and share